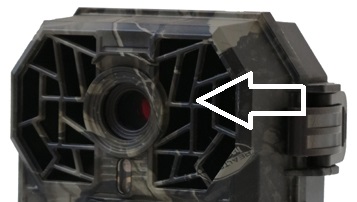 Minimum of shiny areas on the front of the photo trap. Invisible illumination optically masked into smaller areas, reducing the possibility of glare in daylight. The Bunaty photo trap is easily masked.High quality workmanship of all plastic parts with front cover in 3D

3.Integrated Laser Pointer, which again makes it easier to point the photo trap at the desired target.

If the customer wants to install the photo trap in high places, it is often very difficult to aim the photo trap correctly, but with the BUNATY photo trap you simply turn on the laser pointer, you have the photo trap aimed in an instant and you can still easily verify everything on the large display.

4.Switching off and on is easy with BUNATY photo traps

If the photo trap is positioned it is very difficult to turn off the photo trap with these brands without disassembly, you have to take the photo trap off and pick it up, turn it over and flip the small switch. In addition, this switch is very prone to breakage. The BUNATY photo trap has a large and clear switch located under the front cover. The cover of the photo trap can be flipped open and the switch can be easily switched to the desired position.

7.Great quality of night photos , which exceeds even much more expensive photo traps.

10.Bunaty photo trap is made for Czech and Slovak republic which guarantees quality and fast service. Complete Czech menu and high quality Czech manual is a matter of course, including telephone support for setting up the photo trap.

The BUNATY photopast has additional features such as a timer where you can set from when to when the photopast should be active. The time-lapse function is ideal for monitoring large areas or any other time-lapse photography where the photo trap takes photos at regular intervals without the need to record motion

Be the first who will post an article to this item!

Cookies are used to store your settings and preferences, to analyze our website traffic, to provide social media functions and to personalize content and advertisements. We also process information about our use of our site with our social media, advertising and analytics partners. Read more in our Cookies Policy.